Expats are few and far between in Mersin, and over the years I have met some very *ahem* exciting characters.  Some I see once and then block them from my mind and social media in the hope of never passing paths again, and others are my closest friends and allies here in this crazy city hahaha. 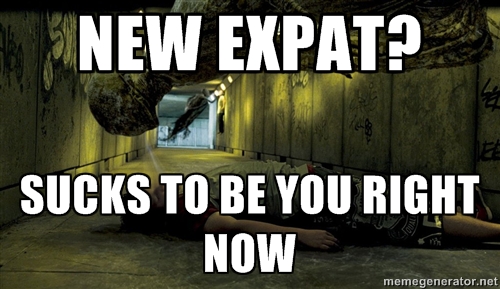 The thing with having such a small group is that when you do meet that character that you just don’t gel with it can be nearly impossible to escape from them.  You see them at the same events, hanging out at the same restaurants and you bump into them at your local pazar/beautician/dentist – but of course you introduced them to said pazar/beautician/dentist!  You dumb ass!!

This happened to me recently, and I found the whole experience quite exhausting.  I was my usual friendly persona, welcoming said expat with open arms and introducing said expat to other members of the group and beforementioned pazar/beautician/dentist; however, I realised pretty early on that I had nothing in common with said expat.  I found said expat’s behaviour towards others in the group appalling and said expats behaviour to the locals ludicrous at times.  Oh, and I also realised pretty early on that said expat was batshit crazy!

Said expat found themselves in a bit of a jam as well while here in Mersin and when the situation imploded (which of course it did) it was all hands on deck.  However, despite other members of the group giving sound advice and being a listening board said expat decided to do the absolute opposite to the advice that was given and found themselves in an even more precarious position.  I don’t know everything, in fact, I don’t know a lot, but I do know that when a situation is shitty, it’s time to leave.  It’s not the time to include as many people as possible in your personal drama.

I think the thing that frustrated me the most about said expat was the fact that she felt she was so entitled to her opinion and expectations and also expected all of us to drop everything to deal her every problem.  Oh, and said expat never said thank you.  Not even once.  Rudeness!

Said expat has gone now thankfully.  I hope said expat never comes back to Mersin or if she does come back then hopefully she doesn’t contact me again – of course she probably won’t because I have already blocked her on my social media and she was banished from the expat group due to her nastiness.

Ugh, I’m getting too old for this shit.