Over the past few days social media has gone a little crazy in Turkey talking about the crap weather.  A lot of people have, of course, started to take their vacations and have arrived for some sun and fun in the numerous Turkish hotspots, Marmaris, Bodrum, Fethiye, etc, only to be on the receiving end of some very nasty weather.

I knew a storm was brewing today because my hair was incredibly frizzy.  I cannot control my hair anymore.  Between the bleaching and the weather it has a life of its own.  I have decided to just let it have its way with me and do whatever it likes.  I don’t really care after all I don’t have to impress anyone.  In fact The Turk told me I smelt this morning (I had just gotten back from a jog – and it was 30 degrees!).  I admit that I did smell but the point that I am trying to make is I don’t need to impress him anymore.  Do I sound selfish?  Are you all going “eewwww”.  Don’t think like that people.  I still shave my legs.  I just don’t need to go through all the crap anymore to impress The Turk.  He wakes up every morning amazed that I am still with him and counts his lucky stars every day lol!  Call me Miss Conceited!  I am just joking of course.

In past years I would travel to Mersin in either September or April.  This would give me the sunshine that I love but without the intense heat that can send me close to the edge.  I would often mention to friends that I knew that summer was coming or going in Mersin because of one crazy storm.  The storm to end all storms, dare I say it, the “perfect storm”.  No I won’t say that.  Let’s just say a bloody big storm.  And today is the day (albeit a little late).

Back to the storm – I am sitting through it right now.  The weather deteriorated rapidly starting with a slow pitter-patter of rain which bounced off the roof and caused puddles.  The puddles quickly became rivers rushing into the çiftlik across the street and a waterfall broke through the half made wall on the construction site next door.  There was no thunder, just an avalanche of water threatening to drown us all.

The hava (wind) became harder, stronger and the rain was more powerful.  This was getting good.  Then it happened.  A crashing sound unlike any I had ever heard before and one, two.  Lightening!  Unrelenting.  One after the other.  Crackling thunder and a mighty flash, one after the other.

What an excellent storm.

Yesterday our dolmuş driver lost his cool.  Postal.  I get it, I really do.  It’s hot here in Mersin and it is only going to get hotter.  It was 35 in the shade yesterday afternoon and when it gets hot people lose their shit but this guy was one sandwich short of a picnic crazy and I did start to worry about our safety (you will understand as the story goes on).

Just to remind you or for the uninitiated a dolmuş is a shared taxi that runs along a set route.  It is usually quite civilised.  They come along every few minutes.  There are signs on the dolmuş so you know where they are going and it is easy enough to wave them down or ask them to stop when you want to get off.  If you are lucky you will get an air conditioned dolmuş which is a blessing in this heat but if they are not air conditioned then it is a little like being stuffed into a sauna with 30 other unlucky souls. 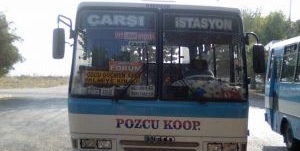 (Stock photo – not dolmus in question)

Up to speed so back to my story.

It all started with the driver receiving a telephone call.  Now I know I do not have enough Turkish to give you a rundown of the conversation but I can tell you that he was obviously not on time (the drivers have a very tight schedule to keep and if they run late or run early they are fined) and his boss telephoned him wanting to know where he was.  He pretty much told his boss to get f*cked and he would get there when he got there.  I had a big grin on my face at this point after all who hasn’t wanted to tell their boss to get f*cked at one stage or another.

He then lit up a cigarette.  No you are not allowed to smoke on a bus in Turkey but the sign above his head “Sigara içilmez” or “no smoking” meant nothing to him at this point after all he had already told his boss where to go.  An elderly lady complained about the cigarette so in reply he flicked it at her feet.  She got out of the dolmuş.

At the next block a young mother hopped on with two children.  She handed over 50TL to the driver for payment and this was the catalyst to the next fifteen minutes of crazy.  The explosion of expletives being thrown around the dolmuş by the driver was astounding and he wasn’t discriminating, he was screaming at everyone.  Daughter (who is well versed in expletives) was gawking at the driver with her mouth wide open.  “I think we need to get off this bus,” she whispered.  I nodded in agreement and was about to ask the driver to stop when his telephone rang again.  The driver looked at the telephone, pulled the dolmuş over, turned the engine off, got out and shut the doors behind him.  At this point I began to wonder if we were being held hostage.

A man stood up and started trying to open the door but he was unable to so he hung out the window and abused the driver who turned around and started kicking the side of the bus.  This was sensational, well except for being held hostage and all that.  The mother that the driver had abused moments earlier started crying and another passenger was comforting her.  I started to giggle (which is what I normally do when I am nervous) and I wondered if the other passengers thought I would lose my shit next.

When we got home Daughter called out to The Turk, “Daddy we just got kidnapped!  Really!”

He is never going to let us out by ourselves again.