It was depressingly grey in Karaduvar.  The sky has been overcast with the potential of rain dangerously close.  I have been waiting for the rain to fall for a few weeks now.  The constant of dust is starting to grate on my last nerve.  It has become cold but not winter cold just overcast, kind of eastern bloc cold.  There has been some major flooding in some of the resort areas along the coast however the storms that have been pounding western Turkey have not yet made it to our neck of the woods.

Last night the rain hit – and it hit hard!

I woke at 1.00 to the sound of thunder and the immediate follow up of lightning.  As a kid I used to count the time between the thunder and lightning to see how close the storm was.  “One Mississippi, two Mississippi”.  Last night there was none of that!  It was crash and flash one after the other.  Holy crap!

Holy crap was right – I realised that my mother in laws cheese had been on our roof the last few days to dry in the sun (well in the overcast with glimpses of sunshine).  I ran upstairs to bring the cheese (now a soppy mess) in and in the process was drenched to the skin.

Fast forward to 5.00 this morning and she was ringing my doorbell about her cheese.  Now I could have thrown it on her but . . . probably better to not do that so with my limited Turkish I yelled down to her, “Peynir, burada, evimi” (Cheese, here, my house).  I would have yelled “go back to sleep” but my Turkish is not that advanced yet.

Come 7.00 this morning and the doorbell rang again.  This time it was the builders (yes I know it is Sunday).  At this point I gave up trying to sleep so Daughter and I took Hurley for a walk.  It would have been better to have put on my swimmers and taken him for a bath but . . . well they already think I am the crazy English lady so I had better not give them any more to talk about. 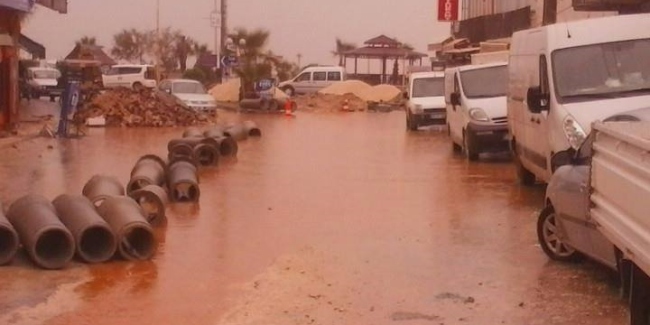 And for those of you who were concerned about the cheese it survived the night (a little worse for wear) and is now drying out on my back balcony which appears to be the only place in Karaduvar that did not get soaked by the storm last night.  It should be ready to eat early next week (fingers crossed).

3 thoughts on “Waiting for Rain”

Mersin is... cats, lots of cats! This is Tabi. He is a sitesi kedi. No one owner but instead he has many owners who care about his health and well-being. Tabi has been incredibly ill but is finally in the mend now. Tabi is a good kedi.
#Cappadocia is... where a lockdown can rock your world (bad pun definitely intended)
#Mersin is... where you can always find beauty in ruins
#Mersin is... simply the most amazing food. Teşekkür ederim @baba_kemal_yeri #topturkeyphoto #turkishfood #mersinfoodblogger