Mersin is full of so much history and gorgeous scenery and yet, living here, I seldom get further than my front door so the opportunity to join a couple of amateur photographers as they travelled deep into the Tarsus Mountains to explore the ruins of a monastery was an opportunity just too good to miss.

After an early start, we left the shimmering Mersin coastline behind us and followed the Gosku River up into the winding mountains, past fertile plains and sweet smelling pine forests before finally arriving at our destination – Alahan Monastery. 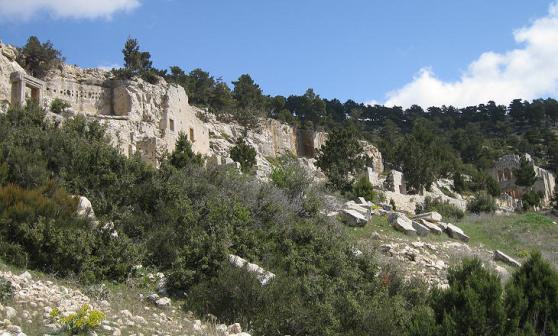 Built over 1500 years ago the monks of Alahan must have known they were onto a good thing when they chose this spot.  It’s a prime location rising 1300 feet above the surrounding valleys with numerous caves, natural water courses and good crop land below.   The ruins are still in excellent condition despite earthquakes, a few wars and no doubt general tomfoolery of locals and can be traversed fairly easily (even with my banged-up knee).

We entered the Monastery via the Basilica where the reliefs on the columns and remaining stone are a good example of the Byzantine era.  Past the Basilica is a small Baptistry for pilgrims to be baptised before following the remains of the colonnade to another larger Basilica.  Archaeologists believe that the larger Basilica is a good example of domical construction using carefully cut and assembled stone without mortar to build the domed ceiling.  The larger Basilica is highly praised for its resemblance to Istanbul’s Hagia Sophia (and arguably built before the famed Hagia Sophia).  The stone and slabs are decorated with reliefs of fish, foliage as well as clearly defined Christian crosses.

The Monastery has been extensively restored and was re-opened to the public in 2015 and is included on UNESCO’s Tentative World Heritage List.

After spending an hour at the Monastery, we travelled back down into the valley passing fields of red poppies as well as row after row of kayısı (apricot) trees before returning back to Mersin, stopping along the way for the well-known Mersin favourite – tantuni.

Entrance fee: 5TL or free if you have the Müze pass (Museum pass).

Getting there:  Approximately 3 hours (including 2 stops), take the D400 to Silifke and then follow the D715 to Mut.  Alahan Monastery is located about 20km past Mut.  Keep an eye out for signage as it is easy to miss due to current road works.

Best time to go:  We were here on a weekday and had the place to ourselves.  Locals tell us that weekends can be quite busy with bus tours visiting from neighbouring cities.

Tip:  If visiting in summer it will be hot, hot, hot.  Take water and wear sunscreen.

I think we have already established that Mersin province is full of ancient sites.  On Saturday (and before the shite hit the fan at home) I went to Viranşehir (Ruined City) to meet with my friend Alana.

For me Viranşehir was a bit of a track from our home in the Village (probably about 60 minutes on public transport) but for anyone staying in Mersin it is located about 20 minutes from the Forum or 30 minutes from the Otogar (catch the Eğriçam bus).  It is quite central.  Viranşehir is a residential area jam packed with high rise apartments blocks and shopping centres so to discover the Roman ruins of Soli Pompeiopolis smack in the middle of this residential area is certainly a surprise.

Sidenote – One of my main issues with Mersin Turizm is that they have virtually no information for a tourist visiting this city or the area.  If you are a history buff there is abundance of ruins and archaeological sites to explore but with little or no information it is incredibly difficult to visit or even to be aware of its existence and Soli Pompeiopolis is the perfect example.  The only reason I knew of it is that Alana had put some photos up on her FB page.

I digress though, let me talk about this site.

Soli Pompeiopolis was once a large town and a most important harbour.  It was the capital of a Persian province before succumbing to the Greeks, Alexander the Great and King Antiochus III.  After all this carnage Soli recovered with the arrival of Roman Pompey who renamed the town Pompeiopolis (because he was obviously full of himself) who, not only held off the Persian Army, also used it as a base for fighting the pirates that preyed on boats in the area.   In 527AD Pompeiopolis was flattened by an earthquake and eventually the town was left to disrepair.  Today the main, and frankly the only thing that you can view as the ruins are surrounded by wire fencing, is the Colonnaded Street (cardo maximum).  It is over 350m long with Corinthian columns and I imagine it would have been very grand in its time drawing you down towards the harbour.  There is also a theatre, harbour, a bath and the monumental tomb of Aratos currently under excavation.  Archaeologists have found many coins, pottery and other artefacts of interest which are currently on display at Mersin Museum.

As mentioned the Turkish Government is currently undertaking excavations on the site and in fact there is talk of building an archaeology museum to incorporate the site nearby which, for a history buff like myself (yes little known fact), would be great.

As you can only view the ruins from the street there is little to hold your interest.  If, however, you make a day of it and incorporate a pleasant walk along the promenade, visit a couple of the bars for an ice cold beer (which Alana and I did) or perhaps have a picnic at one of the many beaches then it is a day well spent.

Daughter and I went walkabout last weekend and ended up about 2 hours west of Mersin in the small village of Kizkalesi.  Most of you who know Turkey or more particularly know Mersin will no doubt already know about this little spot along the Mediterranean but for those of you who are yet to visit this area Kizkalesi should definitely be on your list.

Once out of Mersin the bus ride is enchanting was we passed through small villages, a scatterings of ruins and the never ending blue ocean.  The town itself is really nothing to write home about with its extraordinary number of pensions and holiday apartments that have built along the shoreline and on the lower slopes of Tarsus Mountains but our reason for visiting last weekend is to wonder at the majesty that is Deniz Kalesi also known as the Maiden’s Castle floating in the blue water of the Mediterranean.  Set on a small island just 400 metres off the mainland the island (The Turk tells me he used to swim over to it as a child although I call balderdash on that statement) was built sometime in the 1st century and has been rebuilt many times over the following centuries. Like most things in Turkey there is a legend that is attached to Deniz Kalesi.  It is said that a fortune teller told the King that his beautiful daughter will be poisoned by a snake.  Shocked by the fortune teller’s words, the King tries to change her fate by building a castle on an island where no snakes live.  He sends his daughter to live in the castle.  But a snake hides in a grape basket sent from the mainland and poisons the princess.  Definitely a bit of bad luck for her – maybe the King should have sent the Princess to Ireland.  Incidentally there are hundreds of little lizards on the island sending Daughter into screams of terror at every turn – so that’s definitely a bonus *sigh*.

Daughter and I took a paddleboat over to the island (which really means I had to paddle both of us over to the island while she hung her legs into the water) to explore before returning back to the mainland (which also meant I had to paddle us both back while she complained about being cold even though it was 30 degrees and I was sweating bullets).  If you don’t want to paddle (or know that you are going to get stuck doing all the work) you can take one of the tourist boats over for 10TL. Exploring the ruins takes time and as Daughter and I had all the time in the world we enjoyed wandering around the base, climbing up and down its high walls and examining the mosaics.

The mainland also has its fair share of ruins to explore as well and Daughter and I spent a good few hours wandering along in the sunshine traversing the ruins along the shore including Korykos Castle (above) which is directly opposite Maiden’s Castle and then a quick dolmus to Elaiussa-Sebaste (below) ruins which are only a few kilometres east of Kizkalesi.  If you have a few days you should also explore the Roman-Byzantine cities of Kanlidivane and Kanytelis also has a wonderful example of Roman necropolis.