The Turk and I went to Adana recently to watch a band.  I cannot remember the name of the band, it was a pretty OK band, but for the point of this story the band is irrelevant.  As we left The Turk suggested a quick meal before we trek back to Mersin.  I nodded and pictured an Adana Kebab with all the trimmings.  Yummo.  It’s probably the Turkish equivalent to stopping by Harry’s after a big night out in Sydney.

We walked for a couple of minutes before stopping at a likely looking little Esnaf Lokanta.  It was packed.  Ever table in the lokanta was full.  There were people sitting in the gutter eating from plastic containers and people in the park across the street enjoying a little outdoor picnic.  Yes this place definitely looks good plus I was starving so when The Turk pointed out a couple leaving in the corner I raced for a seat.  I was happily perusing the menu when The Turk started to get extremely excited.  He waved over a waiter ordered me a Kebab and then ordered something I had never heard of before – Şirdan.

Our meals were placed before us and after one glance of The Turk’s dish I literally wanted to upchuck!  I didn’t have a camera with me so I had to google to get a suitable one (thank you tour gordon).  Get a gander at this.  Şirdan is either sheep or cow stomach stuffed with meat and rice.  Cooked up in a large pot and then served with cumin and pepper it is a delicacy here in Adana.  Had The Turk looked up from his dish of repulsion he would have seen I had turned a wicked shade of green – I had had too many red wines to watch him chow down on this particular meal.  I decided to wait outside breathing in the fresh air rather than the pungent smell of cooked intestine. 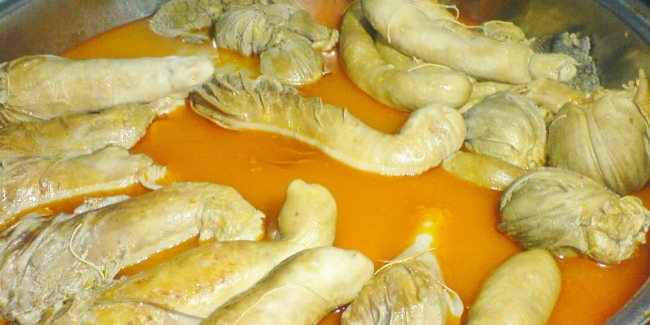 Where is Macca’s when you need it?

14 thoughts on “Nighttime snack in Adana”

#Cappadocia is... where a lockdown can rock your world (bad pun definitely intended)
#Mersin is... where you can always find beauty in ruins
#Mersin is... simply the most amazing food. Teşekkür ederim @baba_kemal_yeri #topturkeyphoto #turkishfood #mersinfoodblogger
Mersin is... staying in summer mode ☀️