I had my first run in with a scorpion early this morning.  At least I think it was a scorpion.  It certainly looked like one.  It might have been a mutant crab but I am going with my first choice which was scorpion.

My Hurley Dog and I were walking along a rocky outcrop near the deniz when he started crazily barking in one spot.  Me being me and incredibly stupid gave the rocks a nudge (which on reflection is possibly not the best thing to do in a pair of thongs) and out popped this weird-ass looking mutant waving its nasty-ass looking tail stinger thingy and snap snappy claw thingys which makes me think it was a scorpion.  I jumped out of the way pretty quickly and it skedaddled in the opposite direction from the screaming Aussie and her half crazed Hurley Dog.

I got home and reported my near death experience to The Turk who pointed out that within a week of arriving in Australia he was nearly bitten by a Red Belly Black Snake and had been bitten by more spiders, ticks, snakes and other various insects while living in Australia than he had in the 40 years of living in Turkey.  Furthermore he had been chased by an emu, kicked in the stomach by a wallaby, stung by a jellyfish and he was pretty sure that a drop bear was conspiring against him while at the koala park.  He said that if Steve Irwin wasn’t safe in Australia then nobody is safe in Australia so I need to stop whinging about one measely little scorpion – the one thing in Turkey that could (maybe) kill you! 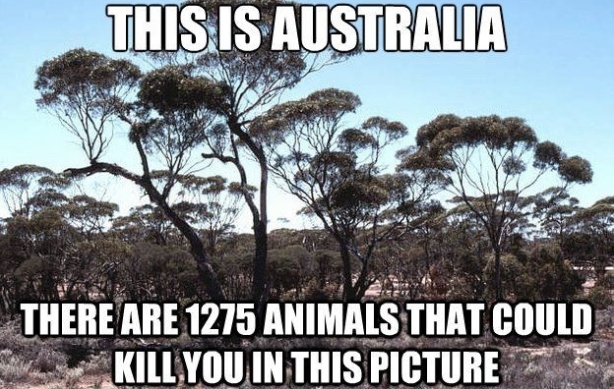 I agree that The Turk copped a bit of a beating from the natives during his 12 years living in “Strayla” but does that mean that I am going to cop the equivalent while living here in Turkey?  Crikey!

7 thoughts on “When Animals Attack”