The first thing I do in the morning is take My Hurley Dog outside so he can “do his business”.  This should take no more than 5 minutes – 10 minutes tops – but some mornings this Sydney born and bred poodle/bichon frise can get mighty sidetracked by the tiniest thing and his morning poop or wiz can become a battle of wills.

I can damn well assure you that if I had waited for 9 hours to take a wiz the first thing I would want to do once that opportunity was available to me is, well, take that wiz.  Not chase a cat.  Not tease the neighbour’s Rottweiler which I am pretty sure goes a little like this: “you’re on a chain and I’m not.  Nanananana”.  Not minutely examine a random bone that has appeared as if by miracle in your eye sight and certainly not attempt to terminate a passing chicken (I will admit I am responsible for his assassin programming to take out any chicken).  I would wiz!  Or poop!  Or damn it I would do both!!

And even when he does finally go wiz he has the ability to cause me more grief than not.  Wizzing on fresh maydanoz or nane waiting to go to market, wizzing on the abovementioned Rottweiler who chooses to behave above his uncouth neighbour or perhaps walking up as casual as can be to Vito and aiming his wiz right on his foot!

A walk with My Hurley Dog is a pain in the ass too.  It’s the equivalent of letting a drunk toddler out on the street.  Having said that I should point out that I have never seen a drunk toddler on the street although I imagine if I had seen a drunk toddler on the street I would probably call social services.  Anyway like a toddler (drunk or not) My Hurley Dog’s behaviour while on a village walk is borderline bat shit crazy.  There are too many insane things going on around him so the opportunity for sniffing, tasting, regurgitating or just generally checking it out means that a walk can go on much longer than it really should.  He darts here and there.  He pees, like, 8 million times.  He chases random cats, dogs, birds, goats, humans.  He barks at the sky.  He harrasses the guard dogs at a nearby business and then strolls away while they lose their minds.  He has been known to run through the maydanoz or nane with abandon while neighbourhood women are trying to harvest for market which causes lots of squeals and “Yapma!” as he passes by.  And I’ve mentioned before his love of all things shit related.  Horse shit.  Goat shit.  Other dog shit. General shit.  Shit!!!!  Anyway it all comes down to asshole behaviour.

I blame The Turk for My Hurley Dog’s lack of social skills.  Pre-village he was a very well behaved little mutt but since moving half way around the world all of his expensive training seems to have been left on the tarmac at Sydney International Airport while his prima donna behaviour is rewarded by The Turk instead of reprimanded.

One of The Turk ways of rewarding My Hurley Dog is that he has started taking him to the beach for a Daddy/Doggy day.  I swear to God this is a thing they do together.  They wander down the beach together.  They might go on a fishing boat and nab a few fish.  Together.  They stop by the çay evi on the way home for çay.  Together.  He doesn’t take Daughter to the beach.  He doesn’t take me to the beach but he does take the fecking dog to the beach.  Last night The Turk told me I resent My Hurley Dog.  He told me I was jealous of their relationship.  Daughter says that he might be onto something but I think they whole lot of them have lost their freaking minds!

Reading this back I have come to the realisation that My Hurley Dog is a spoilt asshole who needs to learn some manners.  Kinda like The Turk.  On occasion anyway.

Two years ago today my SIL and I travelled to Istanbul to collect two of my most precious family members – My Hurley Dog and My Kedi Cat.  They had just flown 29 hours from Sydney to Istanbul via Malaysia.  Like all long haul travellers they were tired and grumpy and the last thing they wanted to do is spend the next 11 hours sitting in customs in Istanbul while we fought to get them released.

This is their story.

I have mentioned before that both of my pets were rescue animals and I had no intention of leaving my fur-babies behind when we moved to Türkiye (well I had half a mind to leave My Kedi Cat behind but that’s because he hates me).  I spent many hours dealing with both Australian customs and Turkish customs ensuring I had covered every base before I finally arranged for them to be flown over. I wanted them to have an easy flight and a simple transfer into my custody at Istanbul Customs.  I was certain I had crossed every “T” and dotted every single “I” but when arriving at customs in Istanbul it was, as expected, a fecking nightmare!

My SIL and I arrived in Istanbul from Adana at 6.30am and I had arranged a return flight for 5pm.  I assumed that this would be more than enough time to collect my two fur-babies, do all the custom rigmarole and have heaps of time to get our flight home with my fur-babies in tow.

Every single thing that could have gone wrong did go wrong.  It began with the Veterinarian not arriving to sign my babies off.  Why didn’t he arrive you wonder?  It was raining.  Poor love.  After a lot of yelling by my SIL (God bless my SIL) he was finally roused into work but did not arrive until after 3pm so basically we sat in customs for nearly 9 hours.  We weren’t allowed to leave, even a toilet break was frowned on.  We had to sit there in case the Vet arrived so we could point out our pets.  They were the only two fecking animals in customs so obviously they were fecking mine!!!!!  I spent a lot of that time in tears.  I could hear My Hurley Dog howling through the customs door but I wasn’t allowed to see him.

After being examined the Vet then questioned whether My Kedi Cat had rabies as he was vicious.  In fact the Customs officers back in Sydney had put a sticker on the cage – “Handle with Caution.  Dangerous Animal”.  After I explained that My Kedi Cat was always vicious – frankly the cat is a bit of a shit – and finally they were signed off.  But that wasn’t the end of it. There was still more paperwork and more money handed over (grease the wheels guys) before finally my two fur-babies were released into my custody.

I know a lot of expats bring their pets with them and I wonder whether flying into the more regional airports would be an easier option.  I expect that if I had taken a direct flight from the UK and arriving into, say Bodrum, then the customs guys would be quite used to nervous yabanci and would deal with them swiftly.  Perhaps but then really Istanbul is one of the biggest airports in the world.  They really should have their shit together!  It’s a domestic cat and a fecking poodle for Christ’s sake!  I know I should be thankful that my babies arrived safely because many do not.  While arranging for my babies to travel I read of many cases where domestic animals pass away en-route due to the stress and being mistreated by airport staff.  The thing is that flying is stressful for us humans I can only imagine what my fur-babies throught was going on.  Being put in cages and stuffed into a very noisy, very cold cargo hold before finally being delivered into my very relieved arms.

After collection we made our way to Domestic to catch our flight to Adana which, of course, we missed thanks to the lazy Vet.  The following flight was already booked with animals and they too would not let us on.  Finally a flight was made available at 11.30 that night that would allow My Hurley Dog in cargo and I would carry My Kedi Cat on my lap in the cabin.

Got home at 3am the following day.  My Hurley Dog was ecstatic and showed his excitement freely.  My Kedi Cat bit me and hid under the bed.  I chose to sleep on the couch for the next few days – just in case the cat tried to kill me in my sleep! 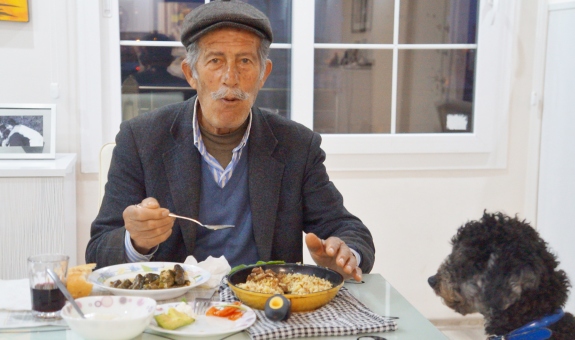 Two years on and My Hurley Dog and My Kedi Cat have settled into life in a Turkish village.  My Hurley Dog has not made many friends with the village dogs as they are all a lot larger than him.  They are farm dogs and not prepared to deal with My Hurley Dog’s precious, precious ways but he does have lots of people to hang around with.  He gets fed at every door (although not usually allowed in every door) and more often than not gets a pat on the head from visitors.  On the other hand My Kedi Cat who, back in Sydney, was a very high maintenance cat seems to fit right now.  He disappears each evening with Evil, My Stairwell Cat, and returns the next morning covered in dirt, mud, thistles, whatever.  He drags himself onto the bed and sleeps until evening.  In fact the other night I was taking My Hurley Dog for a walk and I found him in a dumpster.  So yeah – he is now a Turkish Cat.  It’s called assimulation people!